What Is NOx? Selective Catalytic Reduction 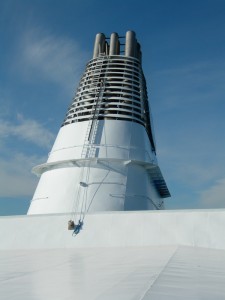 These regulations set the stage for considerable further reductions of the permissible NOx emissions – with the first step (Tier II) already in force since January 2011. Tier III will become applicable after 2021, but only inside specifically designated emission control areas (ECAs), whereas, outside of these ECAs, the Tier II regulation will continue to apply.  This new regulation poses enormous challenges to the engine developers: They have to optimize their products for both requirements, and need to provide technologies allowing for switching between the resulting Tier II and Tier III operating modes of the engines in operation, thereby achieving NOx emissions reduction of more than 76% for 2-stroke engines operating at rated speeds of less than 200 rpm, when switching from Tier II to Tier III mode. Moreover, the Tier III requirements are not limited to compliance with respect to the cycle-weighted NOx emissions, but also include an additional not-to- exceed clause stipulating that the NOx values at the individual points of the test cycle must not be more than 50% higher than the weighted average.